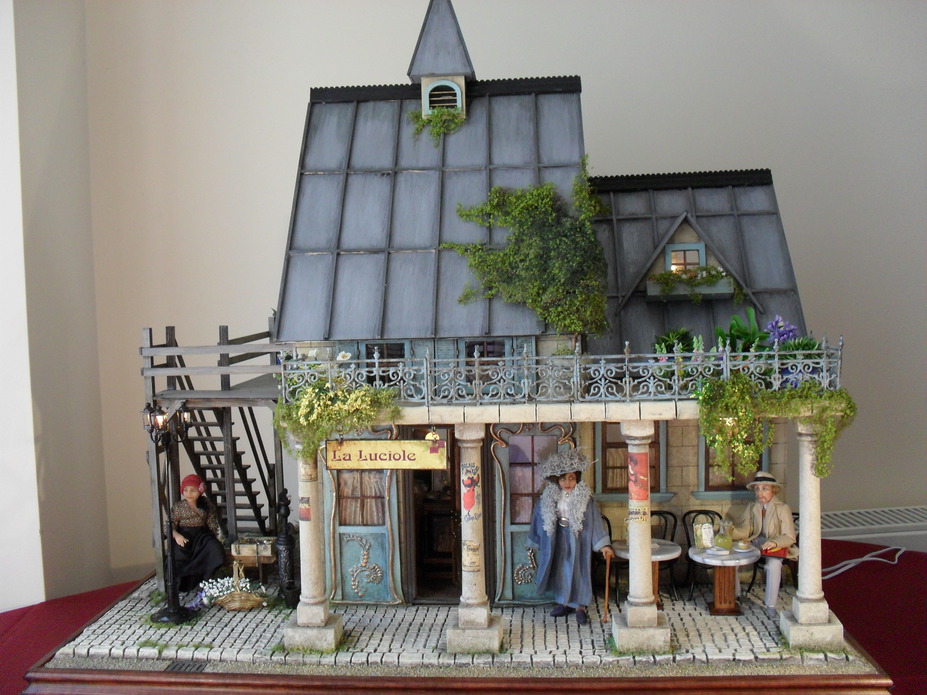 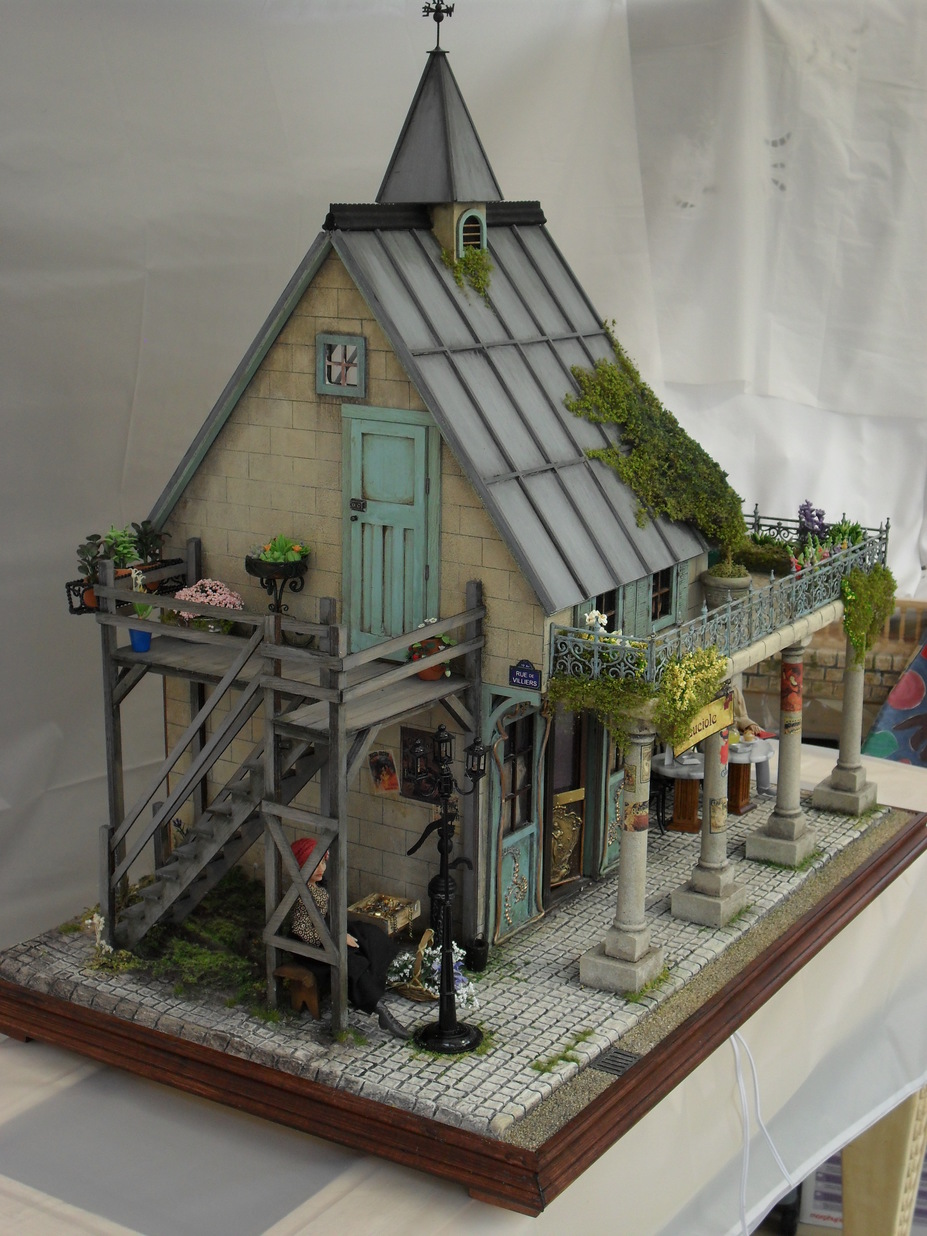 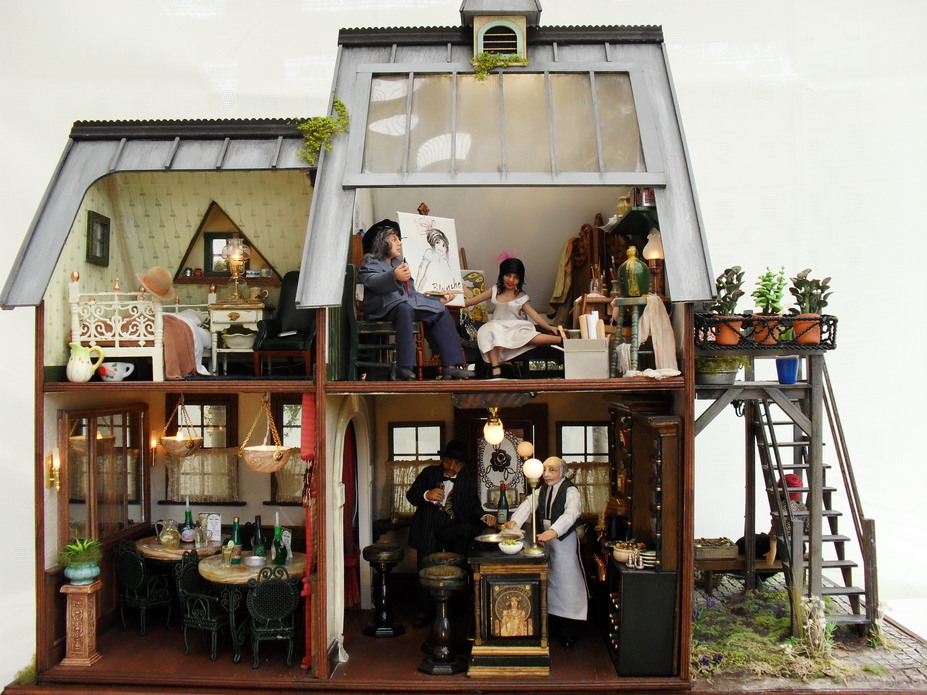 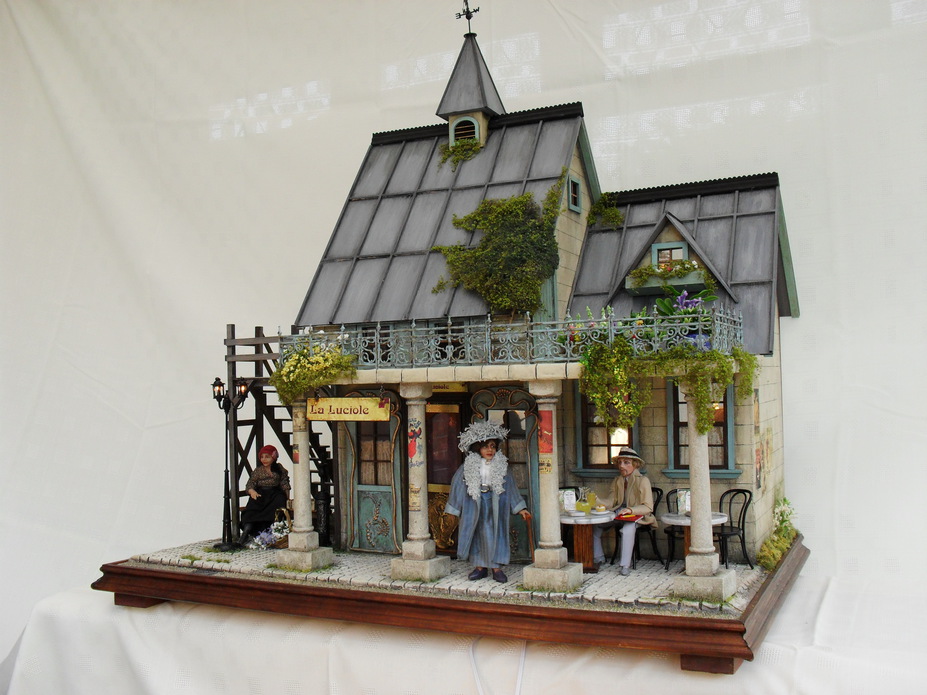 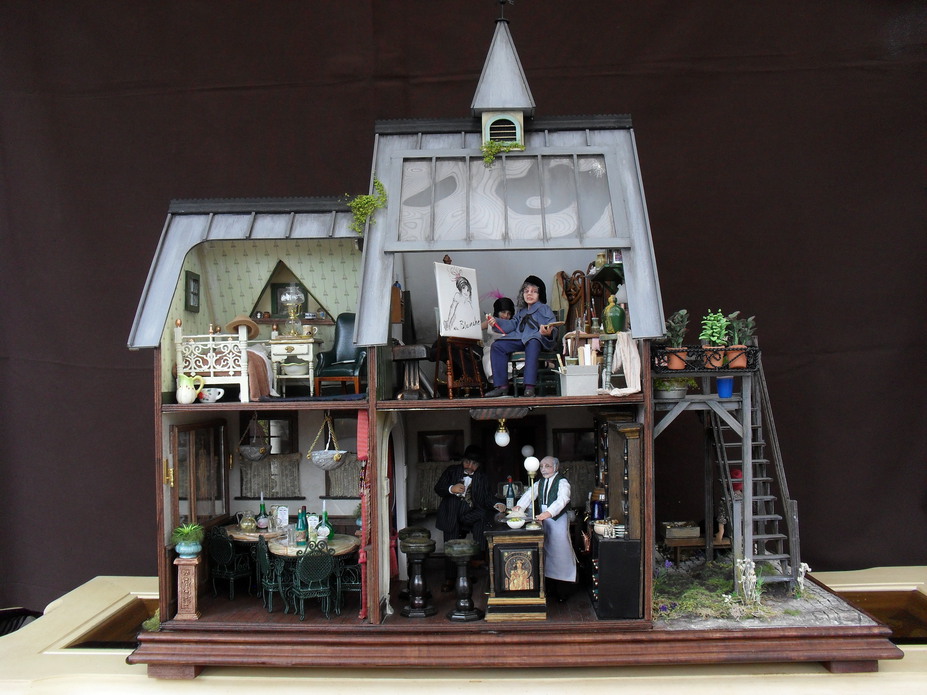 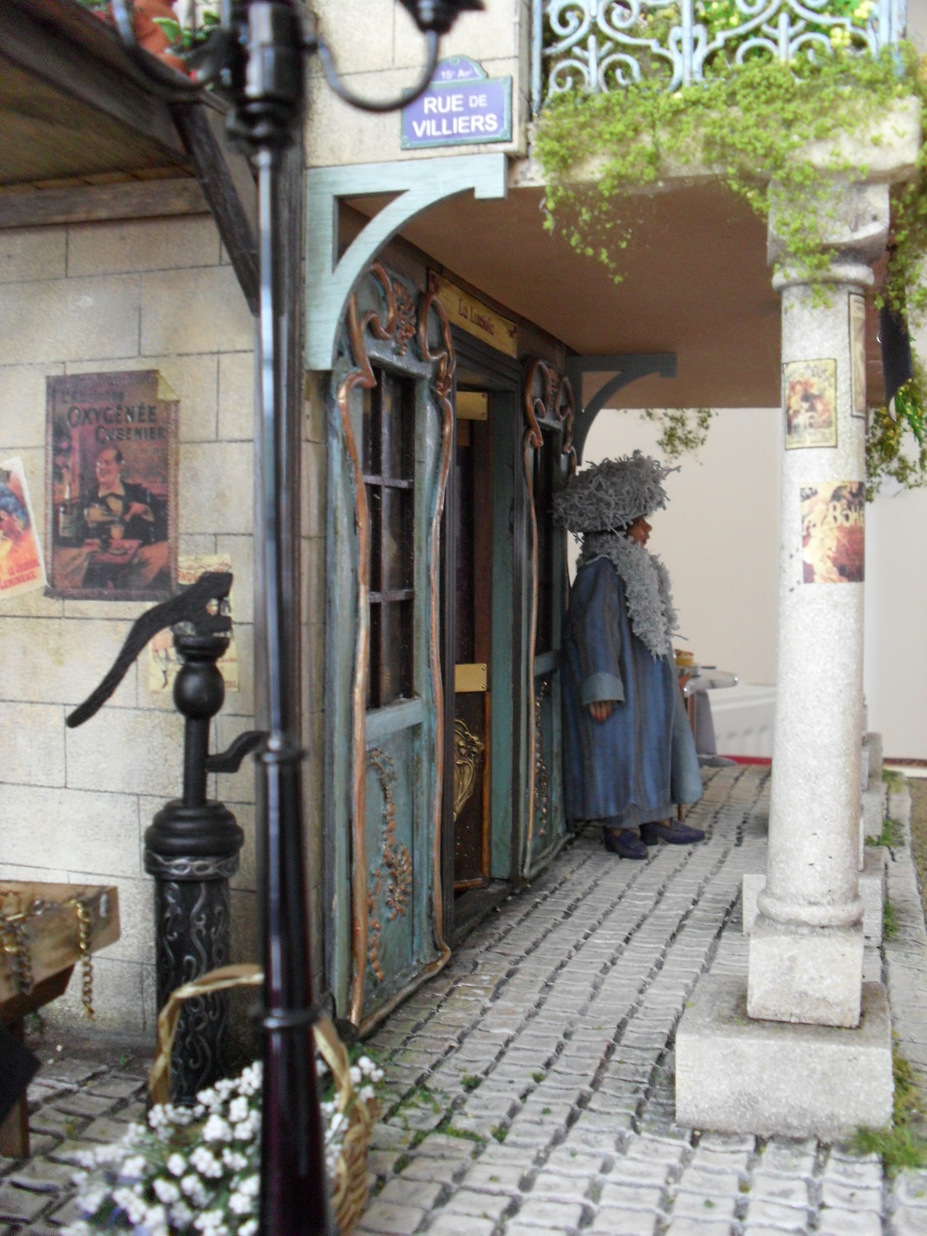 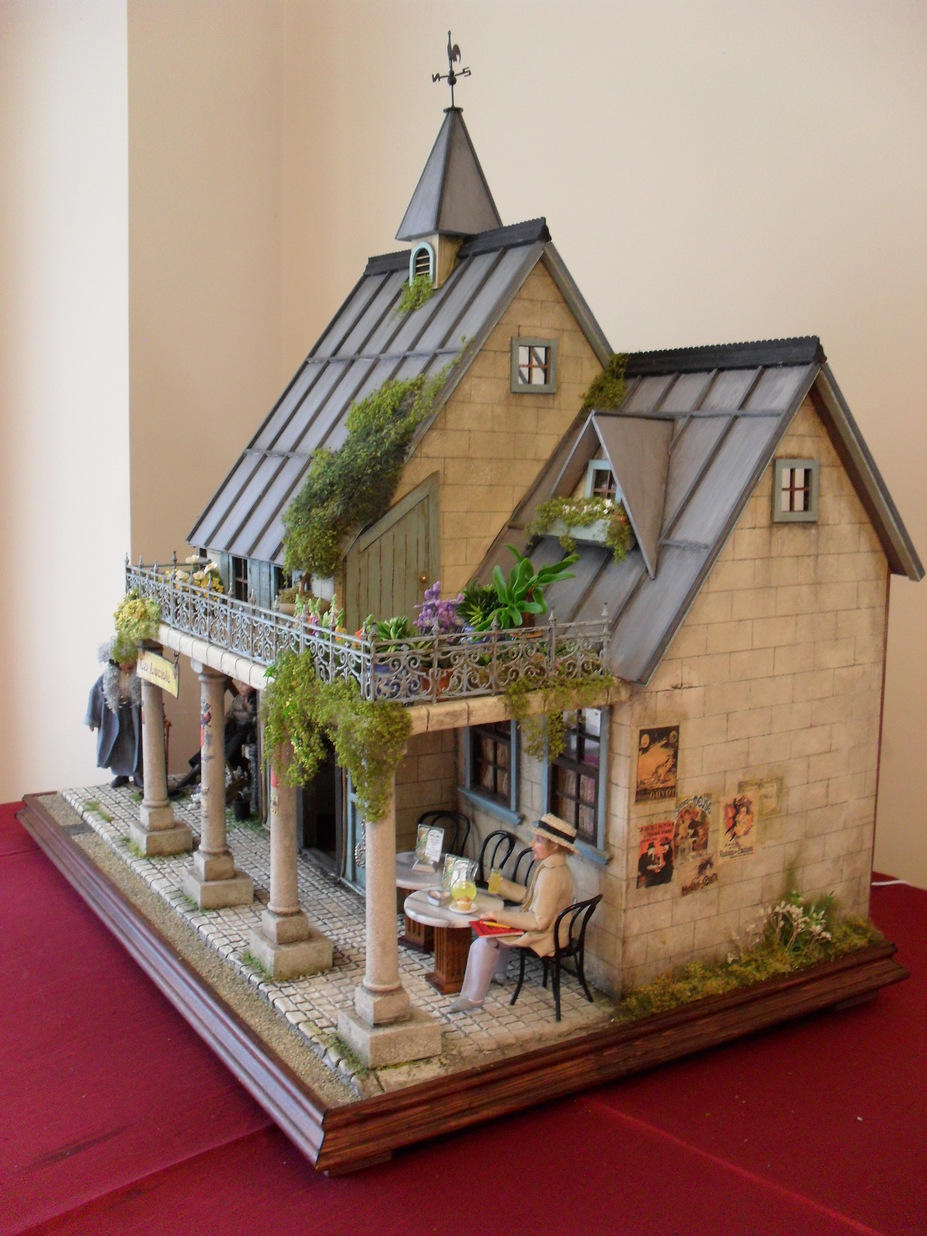 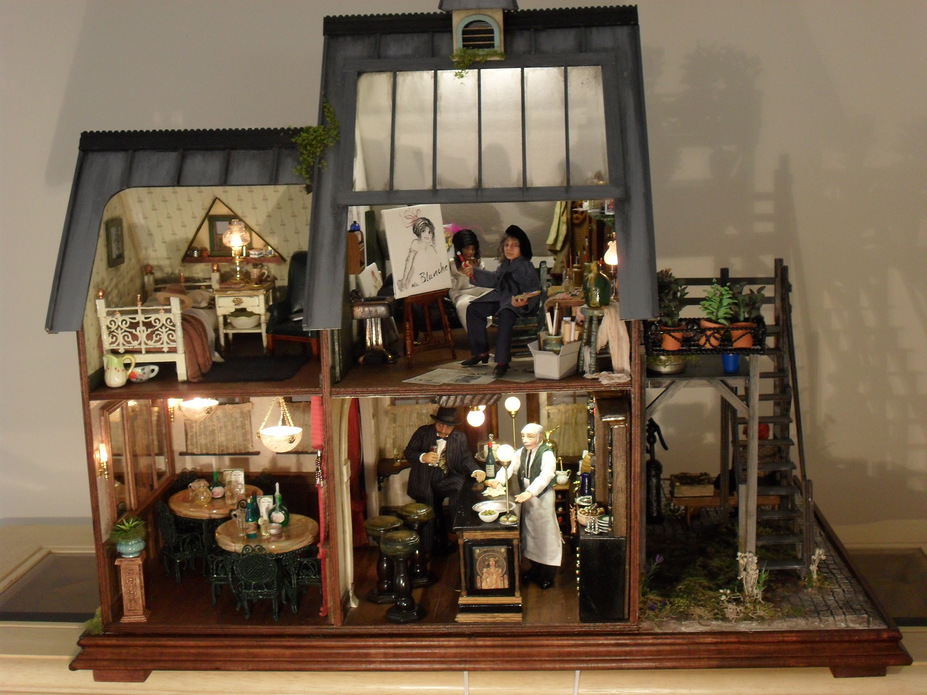 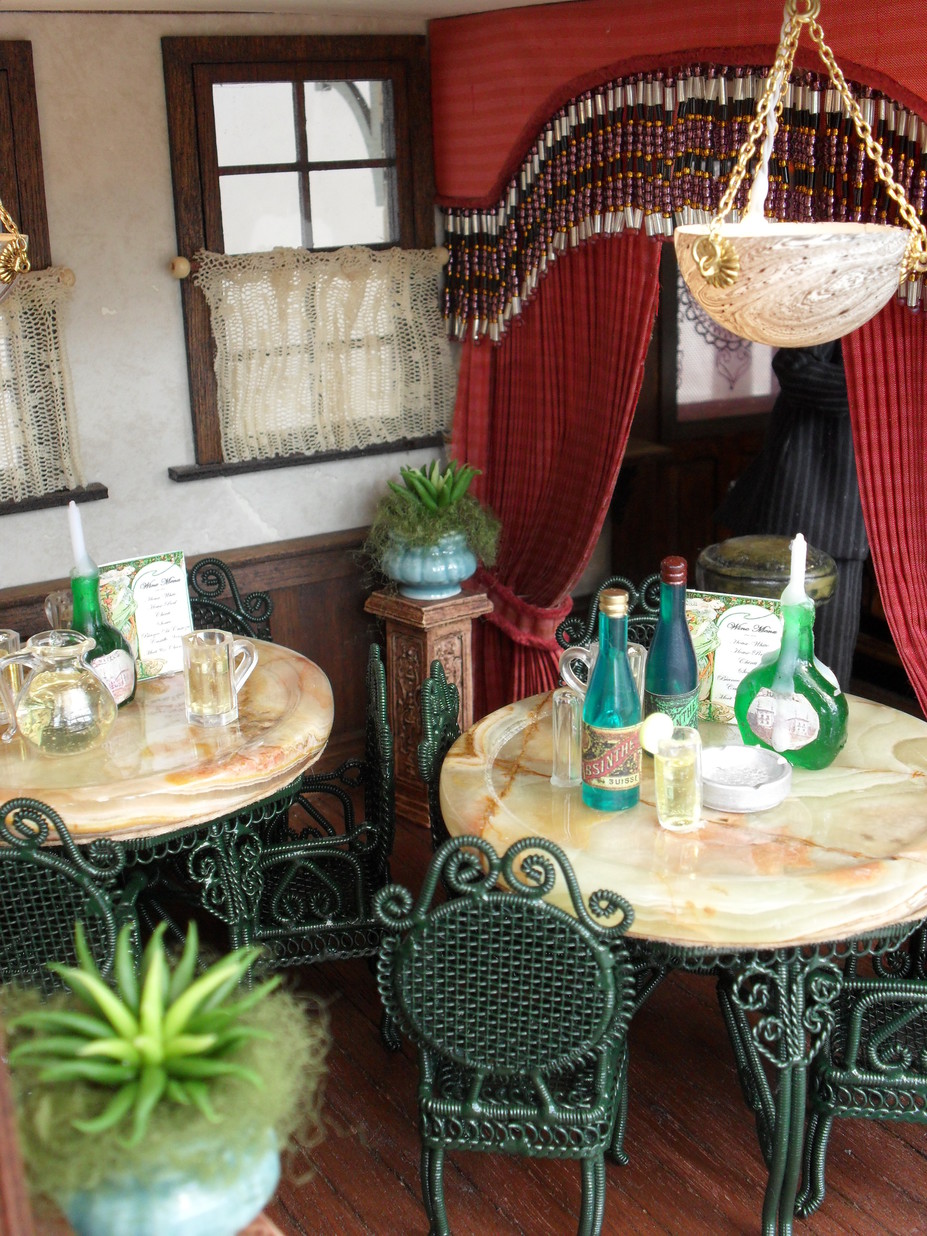 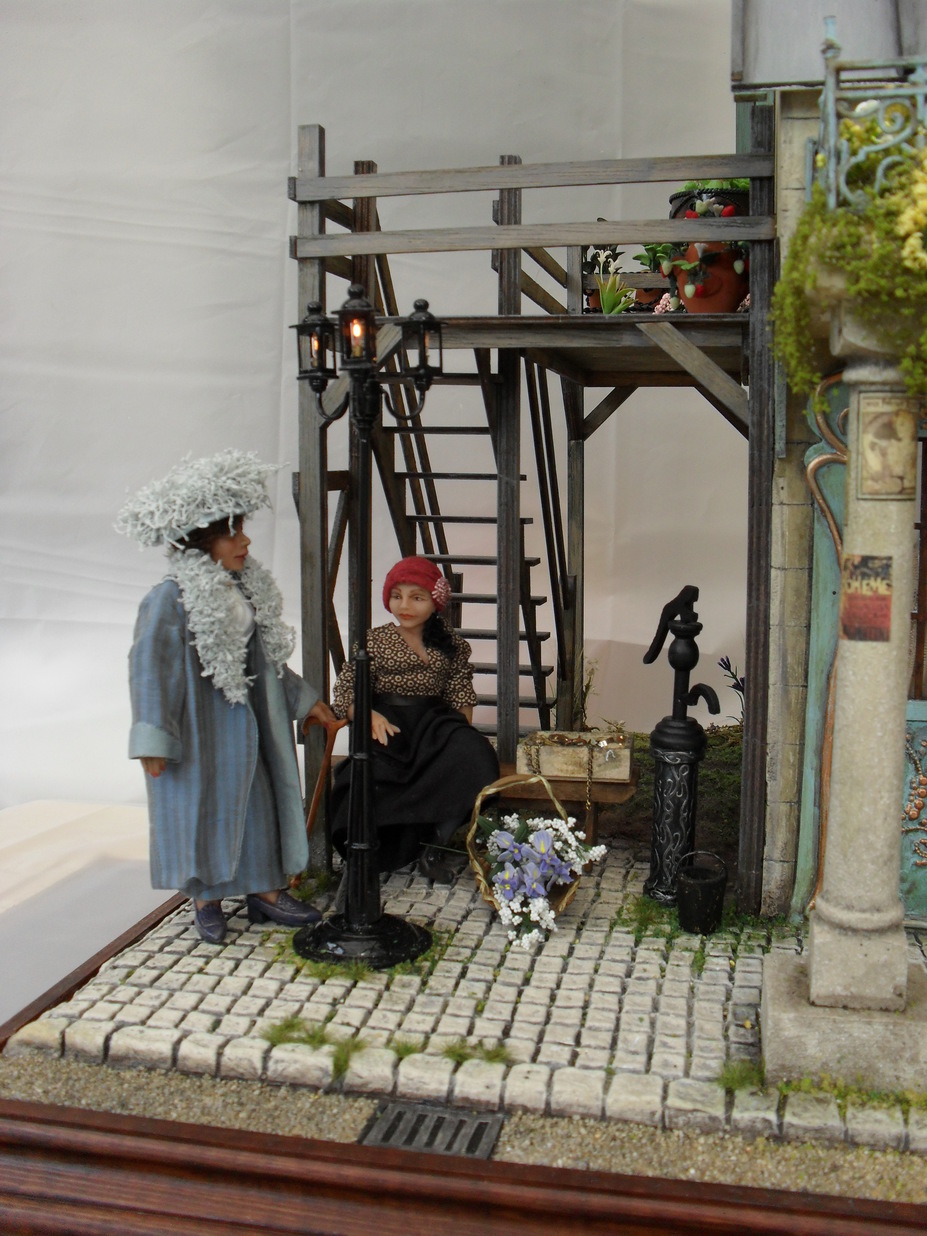 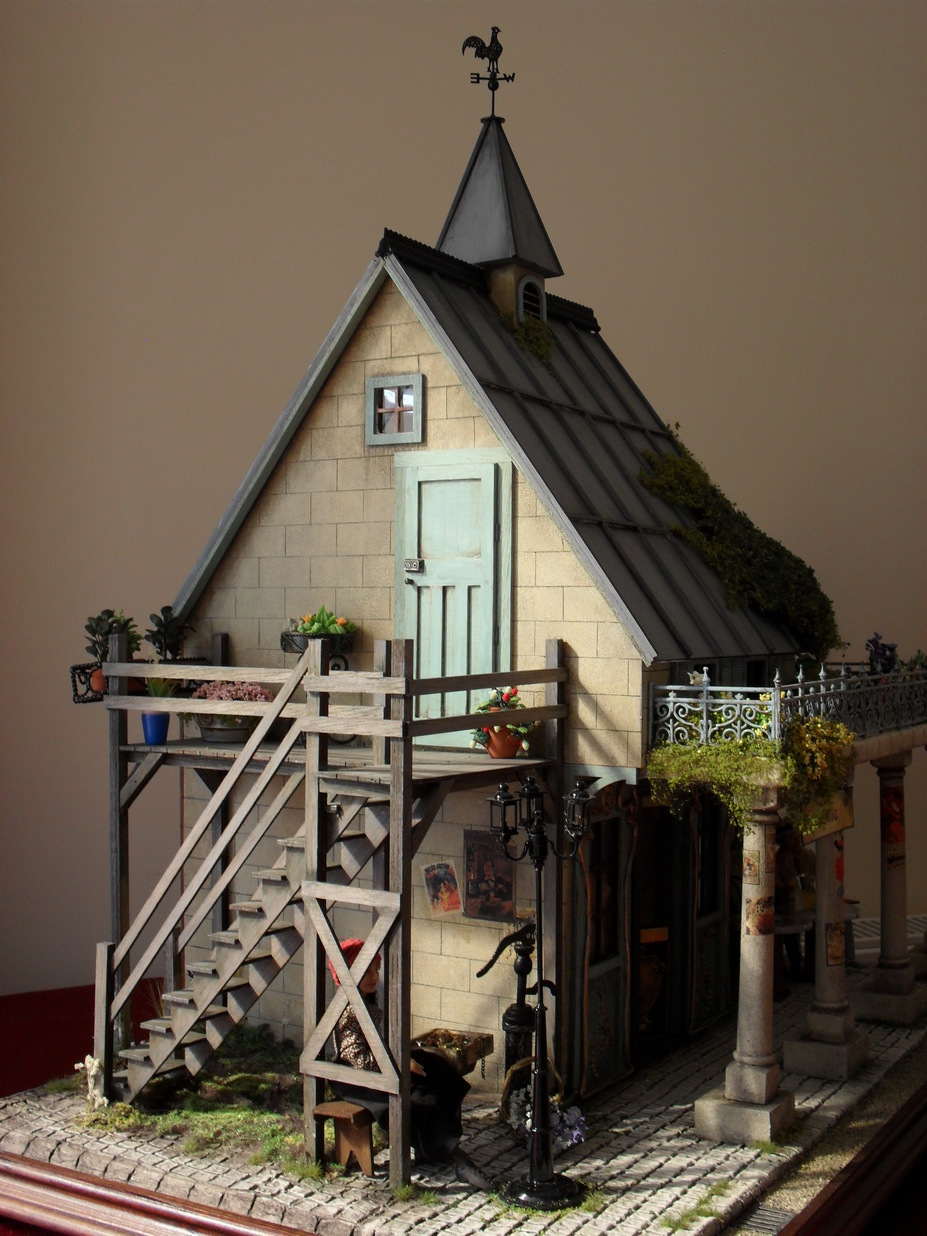 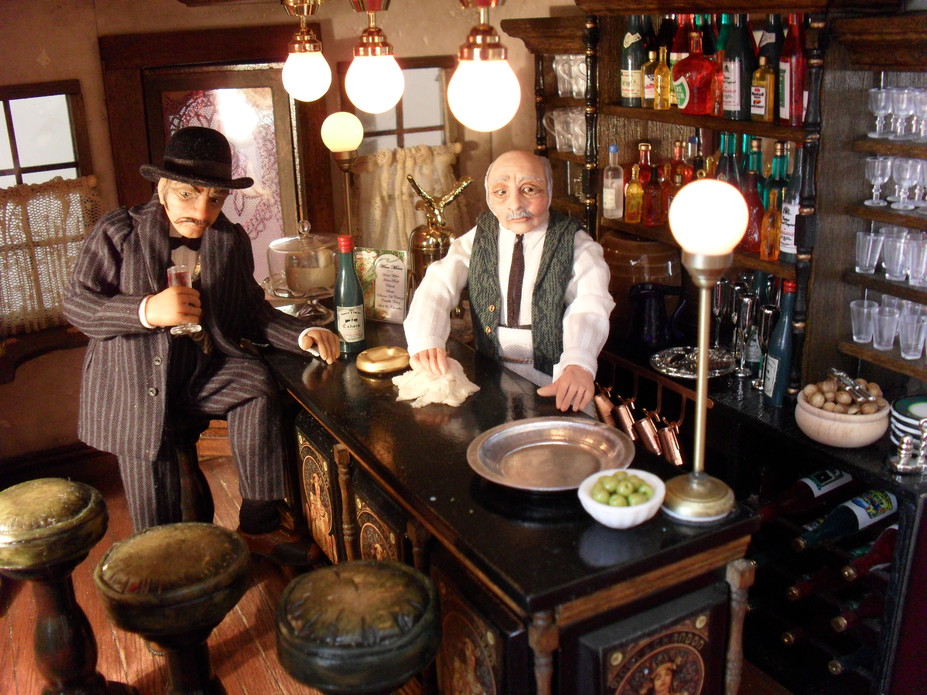 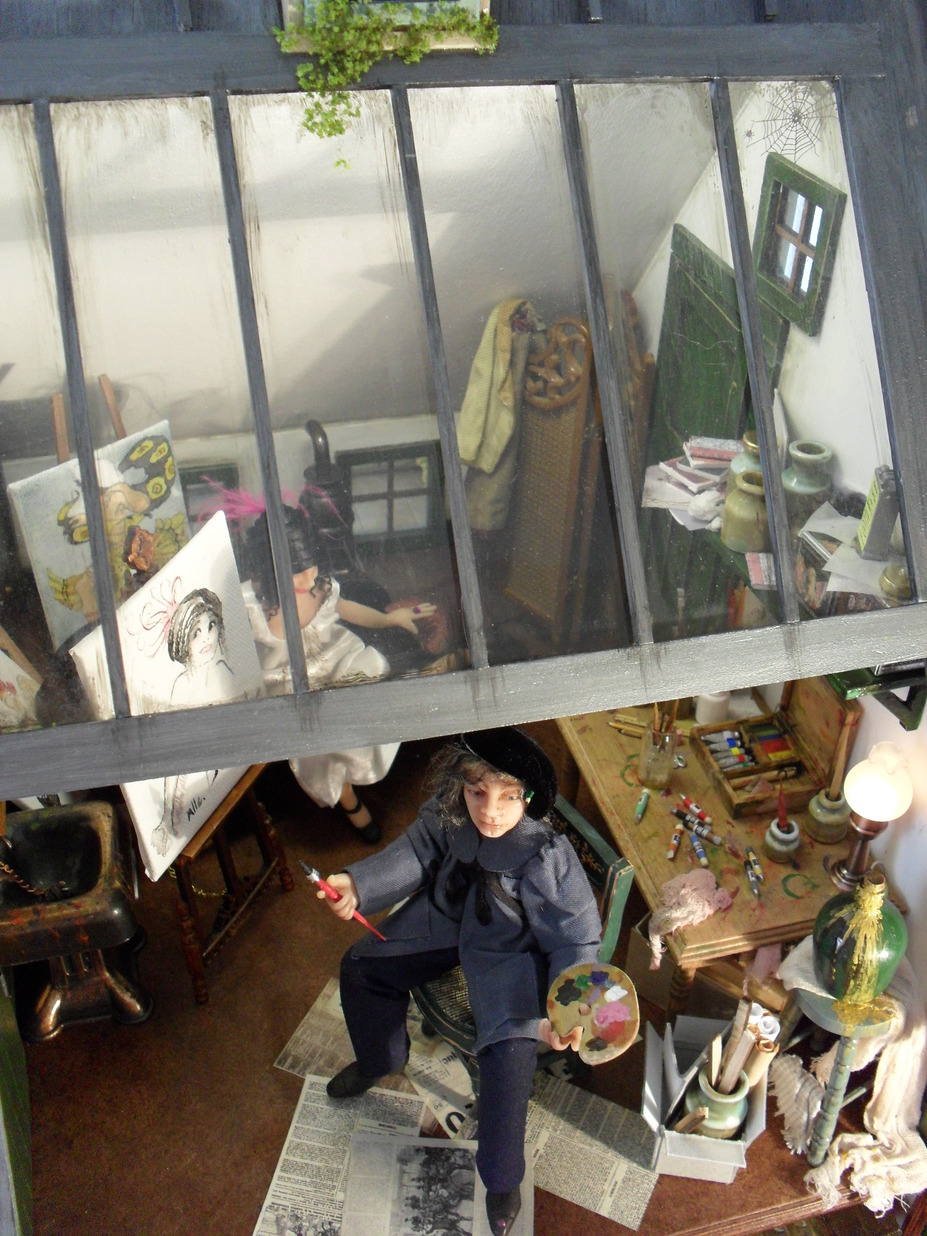 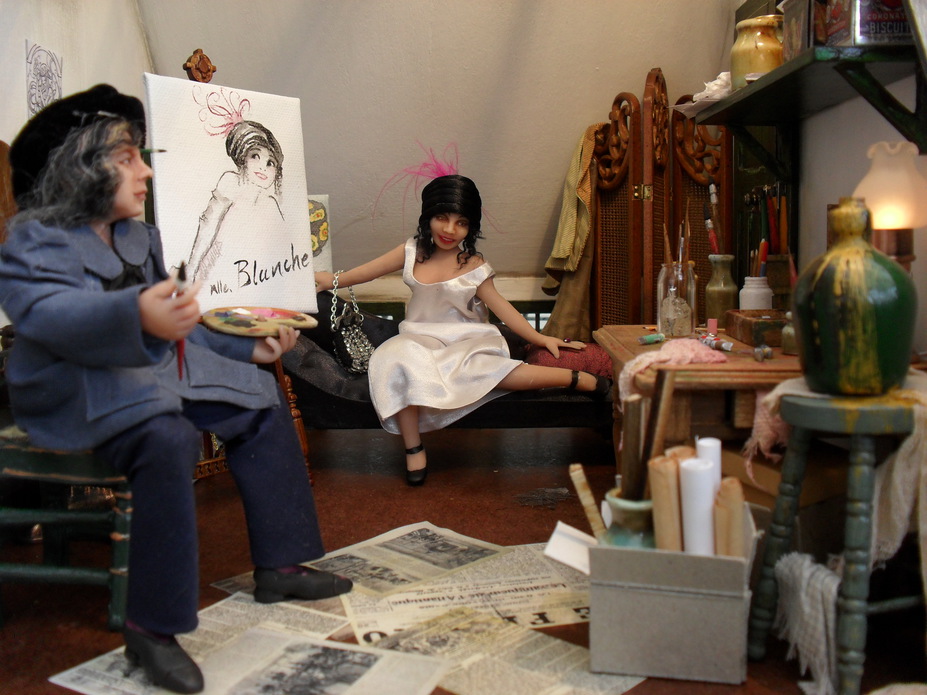 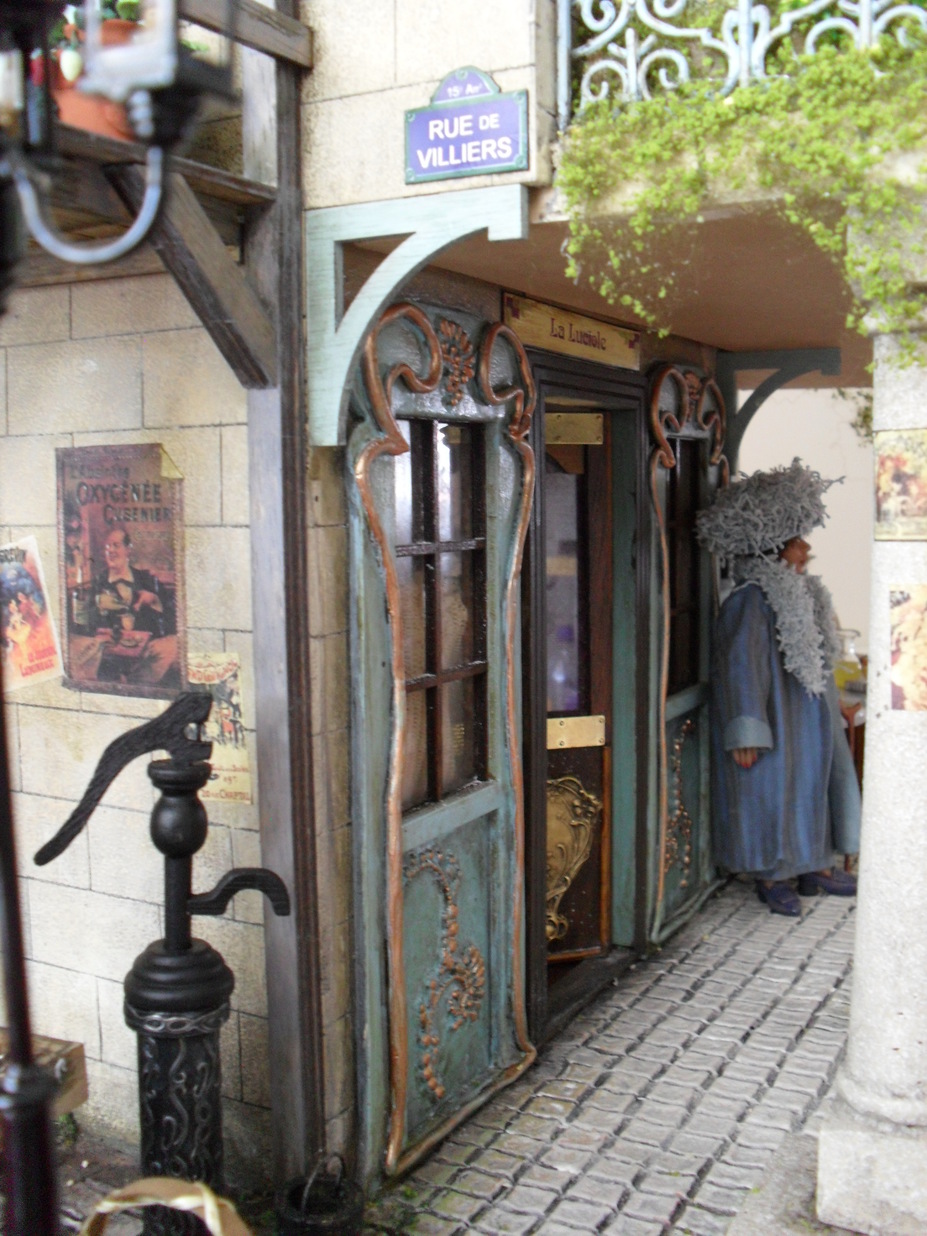 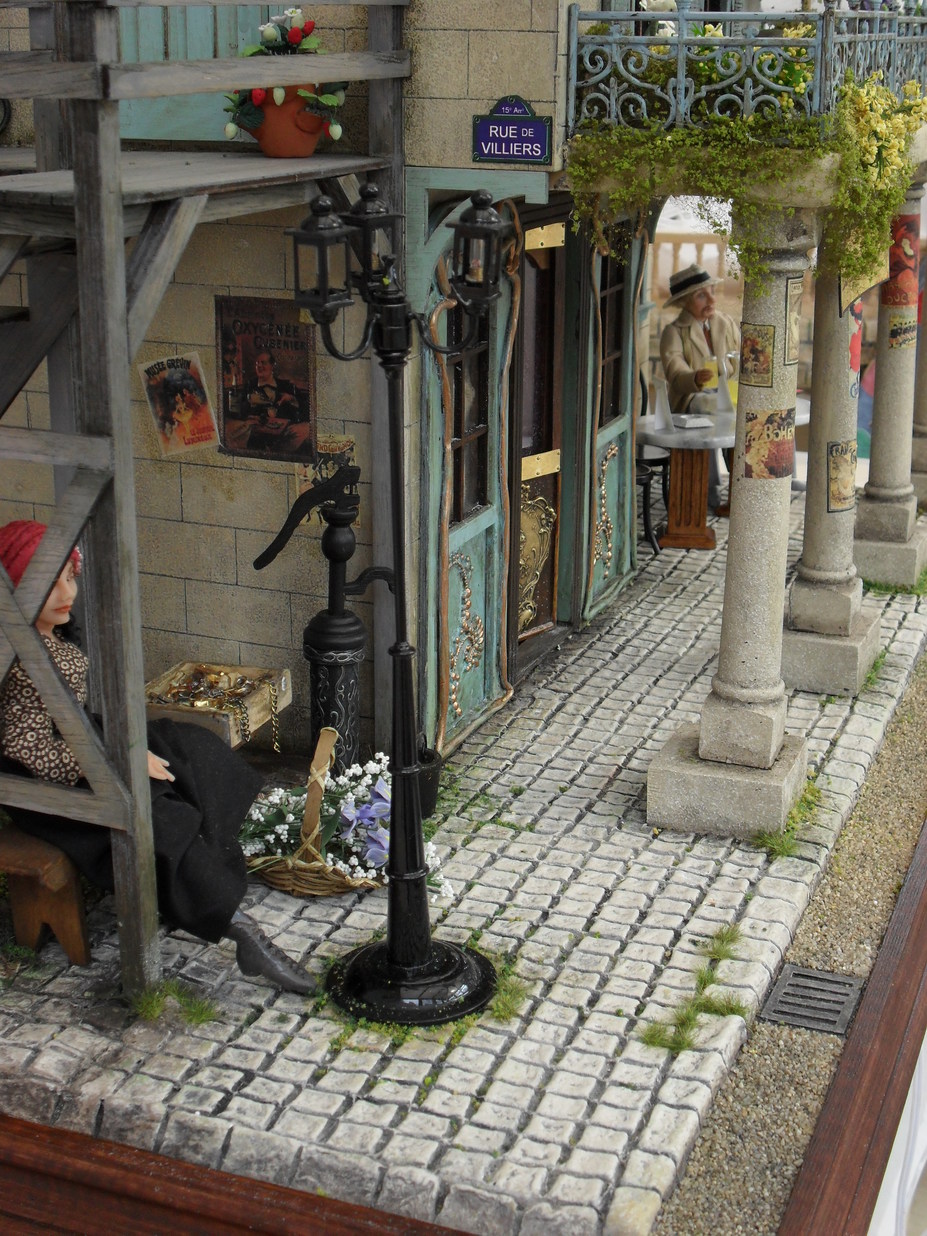 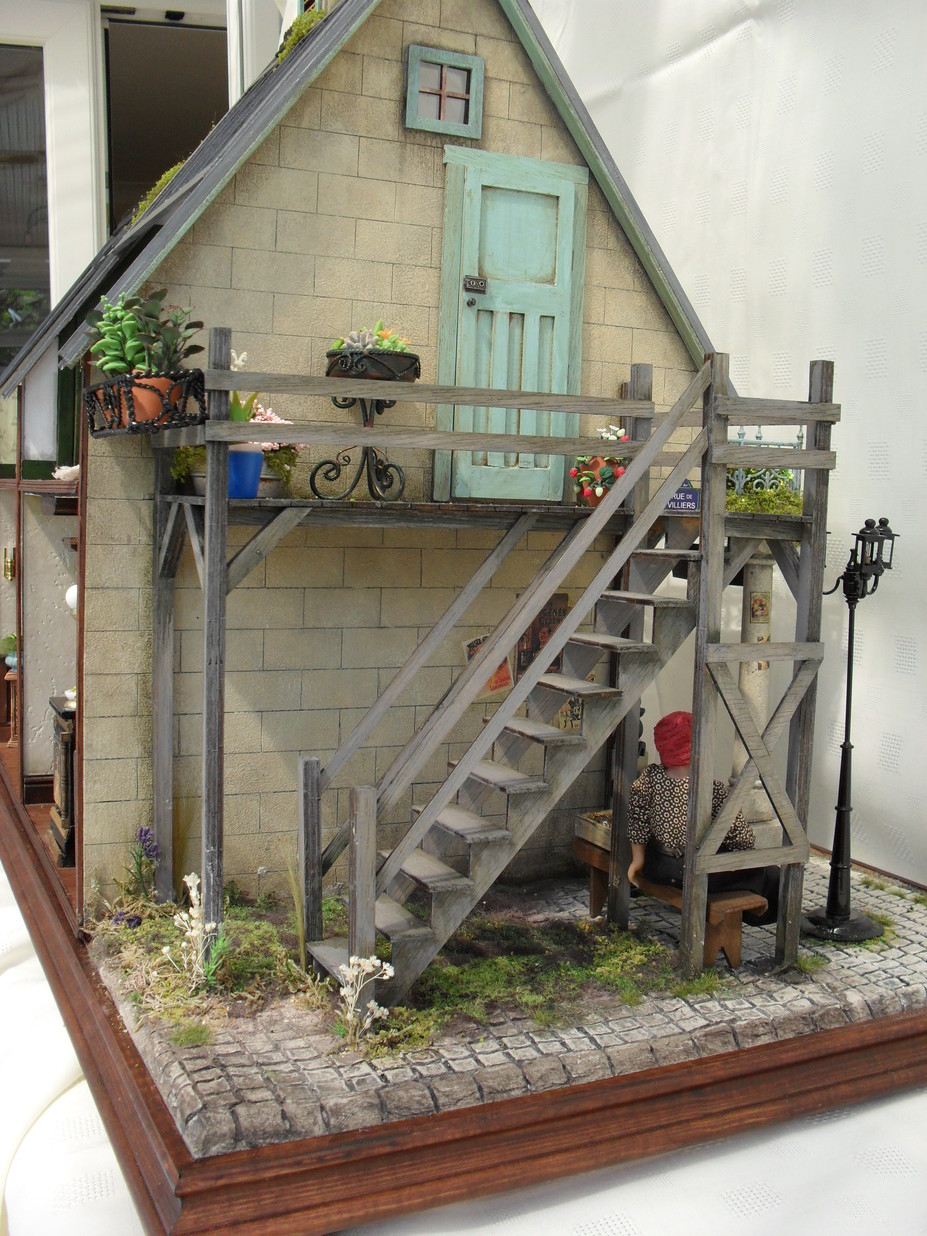 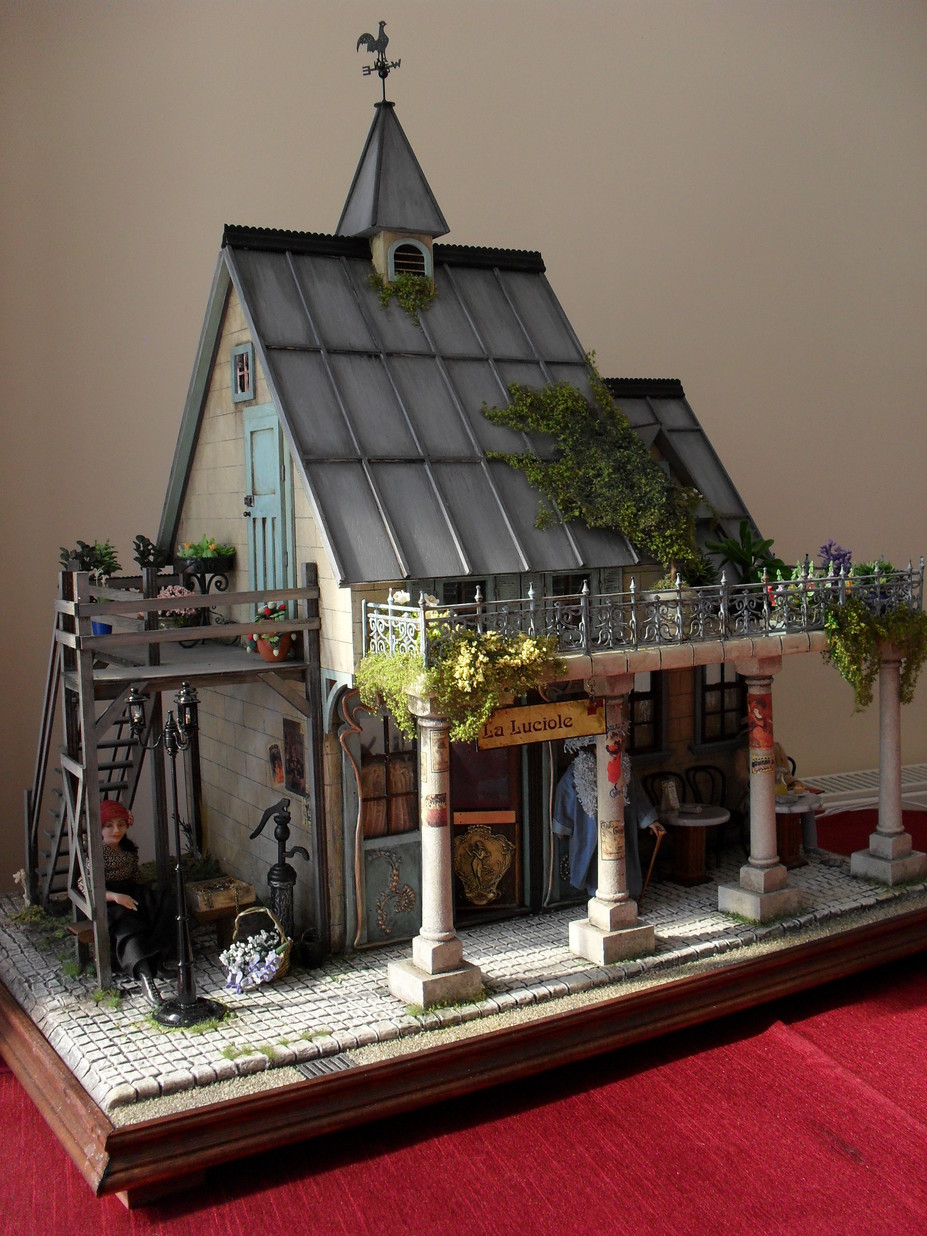 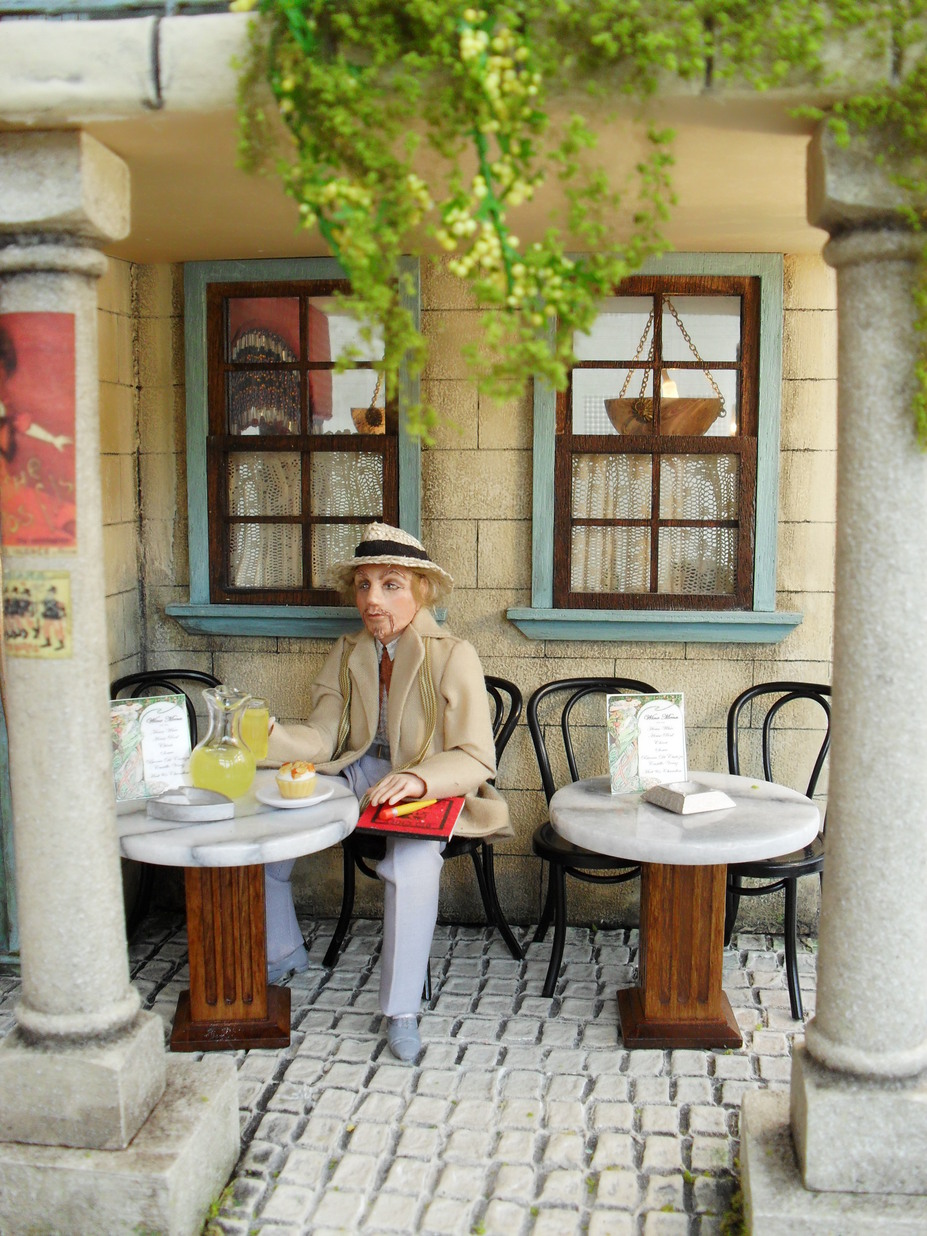 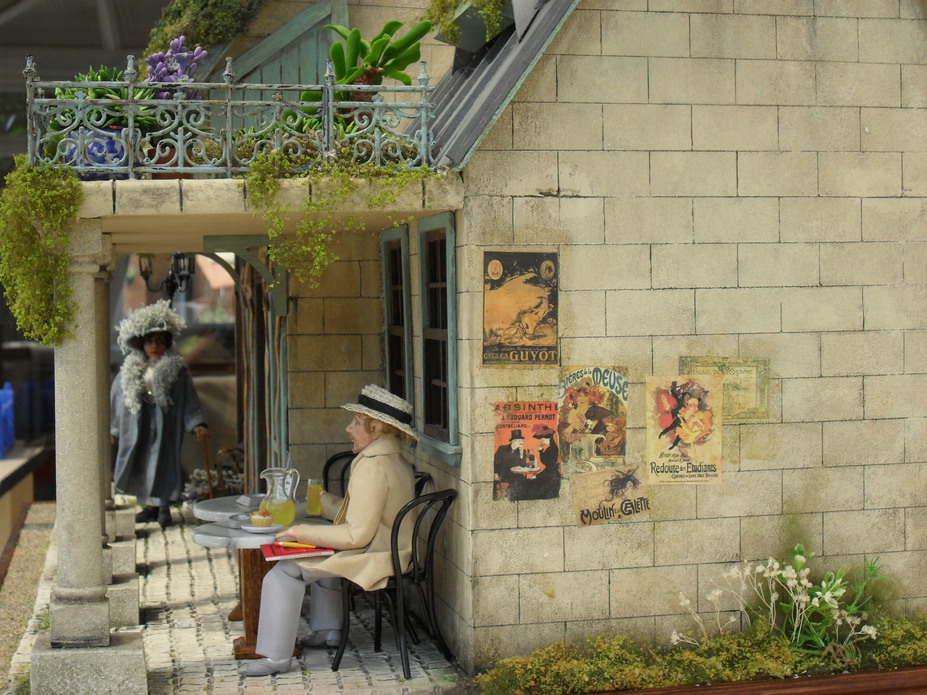 Size(LWH): 81cm x 50cm x 76 cm
– La Luciole, a Parisian Café bar.
Let’s take a romp through the artist’s quarter of Paris, Montparnasse maybe, sometime between 1895 and 1915. I make no claims of historical accuracy or authenticity; I simply wanted to try and recreate the feel of the time and place.
We are on the Rue de Villiers, a small street crammed with interesting shops and café bars and the haunt of bohemian café society. Artists, musicians, actors and cabaret artistes spend their time in La Luciole, an Art Nouveau café bar, discussing and debating but mostly getting drunk and seducing one another. La Luciole has been around for years and Alphonse, the barman, has seen it all in his time and knows how to keep the patrons in order. It attracts both the cream of Parisian café society and the less savoury elements who populate the area, a powerfully magnetic mix. Felix can regularly be seen propping up the bar and chatting to Alphonse. Outside Henri, an artist from a wealthy banking family, sits watching the world go by and occasionally sketching while Madame Jeusette takes her daily stroll to the boulangerie. On a bit of waste land, under the street lamp Solange waits for customers. Solange is only 21 but already has 3 children of her own and several younger siblings to feed. During the day she sells flowers and any odds and ends she can gather or steal. She sells other things at night.
Gustave lives in the apartment above the bar. He’s an artist, not yet celebrated but he’s not starving in a garret either. He makes his living painting advertising posters and theatrical costume designs but he has big dreams for the future. One day his work will be sought after worldwide. Blanche is Gustave’s muse, beautiful, slender and intriguing and if Gustave were being completely honest he would admit to being just a little in love with her. She is a bit of wild child, a cabaret artiste who is currently performing in a revue at the Casino de Paris. In a couple of years she will be the toast of Paris and will be lost to Gustave forever, but for now she is busy making her name, seeking new experiences and can often be found in Gustave’s studio either posing for the artist or just chatting and drinking coffee.
The dolls in this scene are made by me as are many of the furnishings and accessories. I have been influenced by the work of many artists and miniaturists over the last couple of years but in particular by the work of Ronan-Jim Sevellec and Sylvia de Groot both of whom create incredibly realistic and detailed pieces with a European flavour; grubby, lived-in scenes that draw you in and amaze you. I hope that someone might say, yes - La Luciole did that for me too.
Share this on
Related Collections
×
Managing your favorite creations
is one of the advantages of being a member